The State of Black Buffalo, a Discussion with Dr. Henry Louis-Taylor 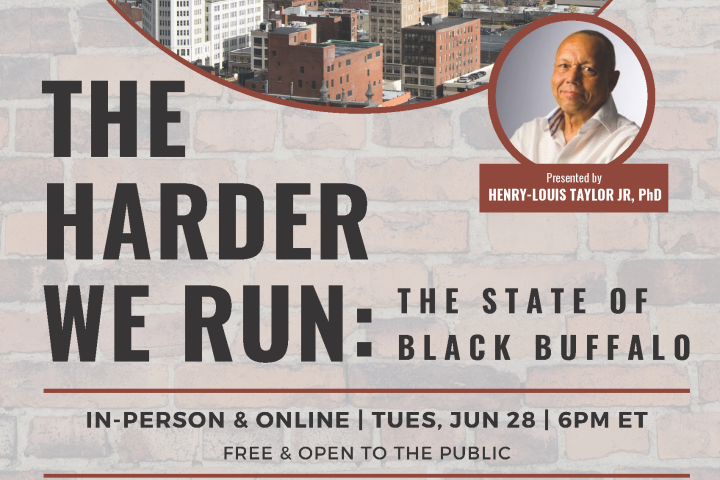 Professor And Director Of The Center For Urban Studies At The University At Buffalo School Of Architecture And Planning Will Discuss His Research Findings Regarding The Reality Of Buffalo’s East Side, Its Racial Segregation and Recommendations for Change

BUFFALO, N.Y. – On June 28, 2022, The Theodore Roosevelt Inaugural National Historic Site, in conjunction with the Cornell University, ILR Buffalo Co-Lab will host University at Buffalo Professor, Dr. Henry Louis Taylor Jr. for a discussion with the Buffalo community on his research findings from a report entitled, The Harder We Run: The State of Black Buffalo. Dr. Taylor explains the reality of Buffalo’s East Side and its racial segregation, the underdevelopment of its neighborhoods, structural joblessness, low wages, limited educational attainment, and poor health outcomes. Dr. Taylor’s study offers specific recommendations to implement an equitable development plan for the East Side of Buffalo. This event is free and open to the public. You can attend in person, or if on line, please register through the following link: https://cornell.zoom.us/webinar/register/WN_1t9VW2QFQl6H0k7uJCY8aQ. After registering, you will receive a confirmation email containing information about joining the webinar. See more here, event page.

On May 14, 2022, an 18-year-old man drove from Binghamton to Buffalo and, targeting a supermarket in a Black neighborhood, shot 13 and killed 10 men and women for the simple reason that they were Black. The racially motivated murders brought Buffalo to its knees. Moreover, with the closing of the TOPS supermarket as a crime scene, many people in the community have no place to shop for food, as this is the primary supermarket on the East Side of Buffalo. The crime and its aftermath are shocking and devastating, and many people in our community are asking how to help. While temporarily feeding the hungry and giving of funds and other support is obviously helpful, a deeper understanding and discussion of issues facing Buffalo’s East Side is necessary so that each of us can take effective action.

Free and Open to the Public

Dr. Henry-Louis Taylor Jr., is a Professor of Urban and Regional Planning and Director of the Center for Urban Studies at the University at Buffalo School of Architecture and Planning, and serves as the Associate Director of the University at Buffalo Community Health Equity Research Institute. Dr. Taylor’s research focuses on a historical and contemporary analysis of distressed urban neighborhoods, social isolation and race and class issues among people of color, especially African Americans and Latinos. Within this framework, Dr. Taylor’s research also focuses on these issues in Cuba, the Caribbean Islands and Latin America. Lastly, Taylor is concerned with the redevelopment of shrinking cities and metropolitan cities, with a focus on social, economic and racial justice. Dr. Taylor is a member of the Steering Committee of the Anchor Institutions Task Force, a national organization that develops and disseminates knowledge to help create and advance democratic, mutually beneficial anchor institution-community partnerships. In addition, he is a member of the Board of Overseers of The Nelson A. Rockefeller Institute of Government of the State University of New York. Taylor has served on the governing boards of the Urban Affairs Association and the Urban History Association. He is on the Board of the Editors of Universities and Community Schools, published by Netter Center for Community Partnerships at the University of Pennsylvania, and is the planning coordinator for the Buffalo Municipal Housing Authority’s Perry Choice Neighborhood Initiative and the founder of the Perry Choice Neighborhood History Project. He created the Cyberhood (thecyberhood.net) on behalf of the Urban Affairs Association.

Cornell ILR’s extension history begins with Buffalo. Since 1946, ILR has played a vital role in the region, working in partnership with businesses, unions, government, education and community organizations to build an economy that works for all. The bold pragmatic new initiatives of Buffalo Co-Lab follow a long line of innovations over decades of economic change. Always aligned with high road principles, ILR consistently promotes radical collaborations in pursuit of the common good. The Buffalo Co-Lab advances an equitable economy and democratic community, collaboratively integrating scholarly and practical understanding to strengthen civic action. Through actionable research, internships, workshops and forums, curriculum development, translational knowledge services, consultation, and public policy formation, Buffalo Co-Lab works on the edge of the new economy. We fuse Cornell ILR tradition with strategic innovation, applying education as a tool to create genuinely reciprocal opportunities in Western New York. The Co-Lab is a place of engaged local impact for academic scholars, teaching faculty, students, extension professionals, community leaders, public officials, and practitioners in the world of work.