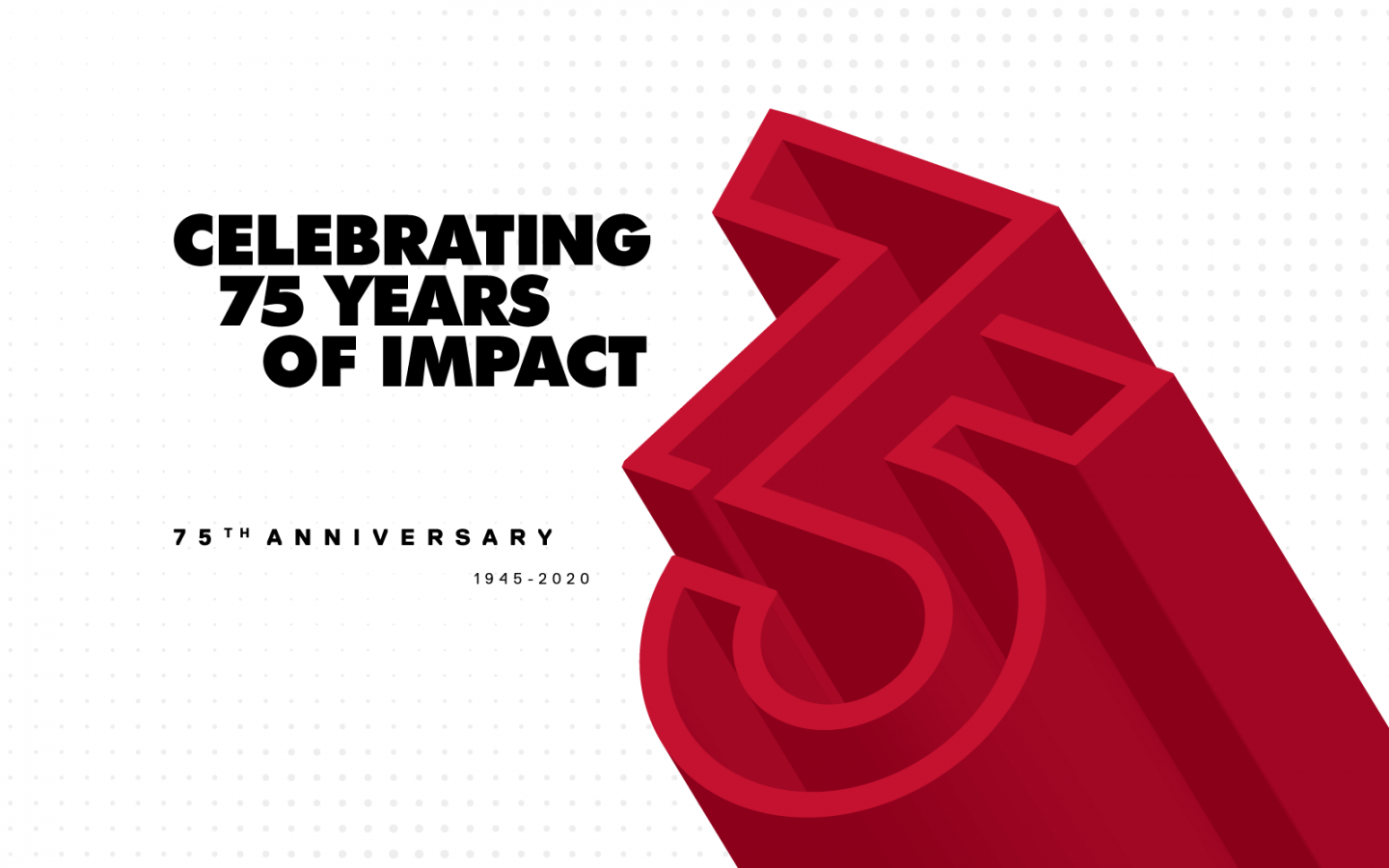 In “Our Stories,” alumni and students share how the school changed them, how they’re making an impact through their ILR experiences and how they see ILR shaping the next 75 years of work, labor and employment.

We recap some of the stories below: a 1950 graduate whose family history has been part of ILR’s core since its very founding, a rent equality advocate, a student who works with victims of gun violence through art, a senior preparing for a future that will help Native Americans and Indigenous people, and a 2014 alumnus who sees ILR at the heart of a safe and productive pandemic workplace recovery.

As we celebrate our school’s 75th anniversary, we would love to hear stories about you and other ILRies. Please send us your ideas through the form on this page.

ILR has a strong start on the next 75 years, thanks to our first 75 and to people like you. Please, enjoy this issue and keep the wonderful ILR stories coming!

Intrigued by the school’s concept of solving labor-management problems, the 16-year-old was also excited to soon be joined on campus by his big brother, Daniel Alpern.

Daniel, who paused his College of Engineering classes to serve in the U.S. Navy during World War II, planned to transfer to ILR when he resumed his education.

In February 1946, four months after Jerry began at ILR, Daniel slipped as he stepped off a ship to board a small boat and drowned off the coast of Korea.

The Alpern family memorialized Daniel by establishing ILR’s first scholarship in 1946 and its first academic prize in 1947. Fifty years later, the school honored Jerry for his decades of service to the school by beginning the annual Alpern Award for alumni.

ILR, Jerry said, is much more than an alma mater. “It really is like my family.”

Liel Sterling ’21 co-founded the Ithaca Tenants Union and spent this past summer campaigning for an Ithaca rent freeze for those with financial difficulties related to COVID-19. She is also the founder of the Cornell American Civil Liberties Union. ILR, Sterling said, has helped her identify problems and work to proactively impact communities.

The school is shaping how students think about the future of work, labor and employment by offering relevant curriculum, Sterling said. “As technology and other societal developments continue to build our understanding of labor, ILR is up to the task of outlining how the law and union organizing practices must change to protect the rights of workers. Since coming to ILR, I have taken courses such as Technology’s Uneven Impact Upon our Workplaces and Employment Law: Transgender Rights, Gig Work, Workplace Safety & More.

“These courses are examples of ILR professors encouraging us to think innovatively about changes in the workplace over time and how our research into and understanding of the workplace must change with it.

By giving us the challenge of understanding an ever-evolving field, ILR is preparing a generation of leaders to take on difficult questions and enact legal and policy change.”

Alex Eshelman ’22  has worked as a volunteer and intern with OPEN DOORS, a New York City-based network of artists, activists and advocates focused on community building, gun-violence prevention and disability rights.

Many OPEN DOORS members have spinal cord injuries caused by gun violence and live at the Coler Rehabilitation and Nursing Care Center on Roosevelt Island.

Alex is combining what he is learning at ILR with his long-time passion for art by helping residents with projects.

Through education, ILR can help shape the next 75 years, he said.

“I want ILR to inspire labor rights literacy so that more people know their rights. If you’re not willing to consider the fact that you might need to use your rights, then you don’t have them.”

“These laws are written and that’s why it’s important to learn about them. I wish more people knew what we do, people should know their rights and that is what I think ILR is all about.”

When Betsy East, MILR ’89, arrived at Cornell in 1980 to take over the Big Red women’s gymnastics team, she was only 28 years old and just a few years removed from being named an All-American on the uneven bars for the University of Massachusetts at the 1973 national championship meet.

She retired in 2017 as an associate dean at Cornell.

Along the way, she earned a MILR degree that helped her career flourish in positions in Cornell Athletics and the College of Engineering.

Since retirement, she has served on numerous boards, including Hospicare, where she co-chairs the organization’s best-known fundraiser, Women Swimmin’, and the boards of the SPCA of Tompkins County and Kendal at Ithaca.

“No matter what I was doing, the courses I took at ILR were really helpful. And it was also helpful that I had coached a team and knew how to build but the HR course work helped me throughout all of those positions. Now that I've retired, and am doing work on committees and boards, it's really helpful to know something about HR, building a team and organizational behavior.

“Truly, the whole picture of the MILR degree has been invaluable.”

Colin Benedict ’21 has worked to widen inclusion for Native American and Indigenous students at Cornell.

Benedict is a Wolf Clan member of the Kanien’kehá:ha Mohawk Nation, Benedict’s Indigenous name, Ari:wisaks, means “He Who Seeks Knowledge,” and is particularly fitting for the senior from the Akwesasne Territory, which straddles the U.S. and Canadian borders on both banks of the St. Lawrence River.

Next fall, he plans to spend three years at Six Nations Polytechnic, a Haudenosaunee post-secondary institution at Six Nations of the Grand River First Nation in Brantford, Ontario. There, he will be enrolled in an immersion program to learn the Mohawk language and culture associated with the language.

After that, Benedict plans to obtain a Ph.D. in Indigenous studies and pursue an advocacy or education role – a path he feels suited for through his coursework at ILR and his extracurricular activities at the university, which includes founding the Native American and Indigenous Mentorship Program.

Benedict says ILR’s flexibility has broadened his prospects for the future.

“Thanks to the wide variety of fields that industrial labor relations can be applied to, I'm in an excellent position to go down basically any career path that I choose.”

Michael Bohling ’14 is the son of a manufacturing worker who helped his United Steelworkers’ peers bargain for contracts and air their grievances.

“At a young age, I felt like I had a grasp on why people went to work, the challenges faced by the everyday worker, and the importance of collective bargaining in the workplace. I had no clue, however, what to do with this raw knowledge – until I attended the ILR School.”

Now a labor relations lawyer for Walt Disney Television in Los Angeles, Bohling sees ILR building a healthy and productive workplace for all.

“It truly is going to take a lot of work from all of us – employees, employers, agencies, scholars – to re-think a workplace that is safe, productive and efficient for everyone. Whatever challenges that are presented, I know that the ILR School will be at the heart of finding the much-needed solutions.”