Alice Grgas, BSILR '12 Experience the World of Work in Japan 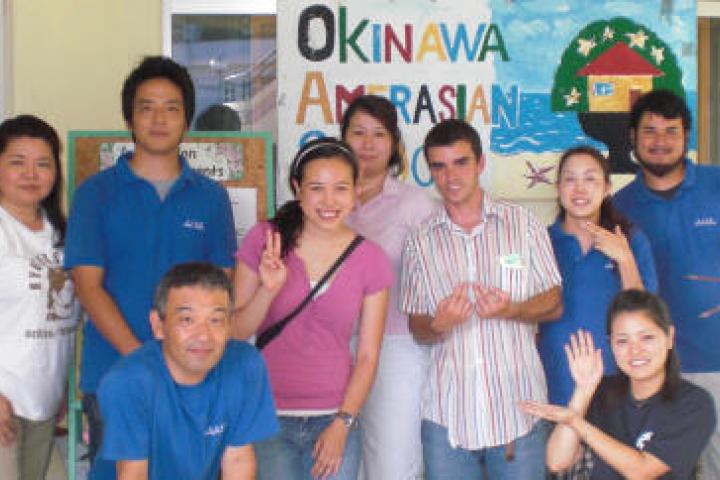 This summer, thanks to funding from the ILR school, I had the opportunity to spend a month experiencing the world of work in Okinawa, Japan. A military “brat,” I moved around every few years of my life, and, while I am half Japanese, I have always felt disconnected from my Japanese side. This summer, I really wanted the chance to experience the world of work as it is in Japan, as an adult. I believed that this would give me a chance to reconnect with a part of me that I’ve never fully understood, and to observe the cultural dynamics of a country in which I’ve never worked. My month in Okinawa was divided into two parts; I spent the first two weeks interning at a school and the second two weeks working in a more formal setting at a hotel.

During the first half of July, I explored education in Okinawa by working at the AmerAsian School. The school was established for students of AmerAsian ethnicity who, for reasons of racism and discrimination, may not fit in at local schools. Most of the students are half Japanese and half American, and a majority come from single-mother families where the American military father left the Japanese mother. The school as a general rule only accepts students with an American parent and an Asian parent, but there are a handful of international students. Students are interviewed for English and Japanese speaking skills as they must be bilingual. In total, there are seventy-two students. The AmerAsian school operates on the Japanese public school calendar and consists of grades one to nine. Upon graduation after ninth grade, students typically enroll in a local Japanese high school. The staff includes both American and Japanese teachers. I assisted the combined fourth and fifth grade teacher, Ms. Mac, who was American and spoke very little Japanese. Ms. Mac taught her class Grammar, Reading and Writing, Social Studies, Math and Science. In the middle of the school day, Ms. Mac’s class split up and moved to different classrooms for an hour of Japanese class. Students studied Japanese based on their level of understanding, not their age. The Japanese teachers taught an hour of Japanese, followed by lunch.

The AmerAsian school is very unique in that the classroom operates in an American style, while the overall institution functions on a Japanese system. For example, after the last class of the school day, all students spend about twenty minutes cleaning the entire school (a practice called souji). Each class has its own list of duties, such as vacuuming the room and organizing the desks, along with school wide duties such as sorting books in the library and sweeping the hallways. Within each class, students rotate through the duties on a weekly basis. The school also assigns summer homework just as local Japanese schools do. Furthermore, in the lobby of the school is a row of cabinets for shoes, with a cubby for each student. When students arrive at school in the morning, they take off their shoes and change into their “inside” shoes. Each time students went from indoors to outdoors or vice versa, they were required to change shoes. Teachers did the same. A similar practice I saw at the AmerAsian school that is typical of Japanese schools was that of communal “bathroom slippers.” At the entrance to the boys’ and girls’ bathrooms were several pairs of slippers that students were to wear when they used the restroom. They took off their inside shoes, slipped on the bathroom slippers, and changed back into their inside shoes upon leaving the restroom. During one of the school’s monthly assemblies that happened to take place while I was there, a Japanese teacher scolded the students for leaving the bathroom slippers disorganized. He advised them to line the bathroom slippers neatly at the entrance after use, and explained that it was everyone’s responsibility to stay organized. These practices reinforced my view of Japan as being very orderly and focused on the well-being of the community. It was surprising to me to see the energetic children actually take the time to change their shoes. I imagine that it would difficult to implement these standards in an American classroom, not only because it is so different from the way American schools work, but also because the concept of outside dirtiness and inside cleanliness is a foreign one.

One of the American teachers I talked with commented on the notion of collectivism. When I asked her what it was like to be an American teacher with an American education degree working in a Japanese school, she replied that she had to get used to the emphasis on collectivism and conformity. She also commented that it was difficult to align discipline styles among the American and Japanese teachers. Ms. Mac also touched on this, saying that the Japanese teachers discipline students by giving them work (i.e. making the student clean), while the American teachers deal with the issue directly (i.e. taking a student’s chair away when the student rocks in the chair after being told not to). She added, “If we made the student clean in the States, we’d be charged with child labor!” One of the Japanese teachers I talked with also acknowledged the difference in discipline styles. Both sides agreed that it was a much easier issue to deal with because the American and Japanese teachers communicated openly on the topic. However, one of the American teachers complained, “No one tells you if you do something wrong,” adding that she felt she always had to find out her mistakes the hard way. In contrast to the work culture in America, she felt that, in Japan, she could not voice her opinion in a staff meeting and instead had to directly approach the top person one-on-one. While I have been in casual American – Japanese settings before, my experience at the AmerAsian School allowed me to see its dynamics in a workplace setting and see how crucial communication actually is. Due to the child-oriented and educational nature of the institution, I felt that the staff could communicate openly and informally. It piqued my interest in how the same staff would communicate in a more formal, business setting.

The second two weeks, I worked at the ANA Intercontinental Manza Beach Resort. During this time, I lived in the employee dorms, located 3 bus stops south of the resort. The day before I started working at the hotel, I had a two hour informational meeting with the general manager and another new male employee. During this meeting, I was told that females must wear make-up and lipstick. There were strict rules on permitted jewelry, perfumes and hairstyles for both males and females. During the meeting we also practiced different forms of speaking. While I knew that polite Japanese differs from casual Japanese, I learned during this meeting that there are different categories of Japanese within the polite level. Specifically, we reviewed the Japanese used when speaking to customers and the Japanese used when speaking to superiors at work. The two hour meeting was my introduction to the high standards employees face in their conduct and appearance. I knew that the customer service field had strict norms, but I didn’t realize the extent and detail to which a hotel tried to regulate its employees.

I worked in housekeeping during the first two mornings at the hotel. In the afternoons, and the three days after that, I worked in the bell section. As a member of the bell staff, I greeted guests as they entered and left the buildings and assisted with luggage and guiding guests to their rooms. I got another lesson in detailed etiquette when a superior scolded me on my first day for standing with my hands behind my back instead of crossed in front

During the second week, I was assigned to work in one of the restaurants in the hotel. The restaurant, called Orchid, was a buffet style restaurant serving local Ryukyu dishes. It also hosted two performances every evening of traditional dance, lion dance and drumming. I started work at 2:30pm and participated in preparations, service and clean-up, ending at 11pm. On my last day, I shadowed at the front desk for both check-ins and check-outs.

During my time working at the different sections in the hotel, I realized how much communication is necessary between employees and between sections. The bell staff employees all wear headsets and are in constant contact with each other through their microphones and speakers. Different sections frequently touch base with each other. For example, the front desk staff calls housekeeping numerous times each day during check-ins to confirm that rooms are cleared. The head of each department has a desk in an office located directly behind the front desk, and although each desk belongs to a particular department or position, staff move quite freely between the desks. I got the sense that communication with customers added more stress to the employees than their interactions with each other, due to the formal language and Japanese service culture.

Working at the hotel gave me a very in-depth view at the behind the scenes of a hotel and of a large workforce. I observed firsthand conflicts between higher and lower levels of employees. During my stint in housekeeping, the two employees I was assisting conversed extensively on how their superior could never get rid of old documents and how the boxes always got in their way. In the employee cafeteria, staff of different levels never sat with staff from other levels. Once, in the female locker room, I overheard female employees talking about sexual harassment, complaining about a superior that touched them in inappropriate places and made comments about their bodies. Bell staff was always complaining about overtime. While housekeeping and restaurant staff have predictable schedules, the bell staff have a range of work hours, and overtime of two hours is the norm. The HR manager that led my information session was usually at work by eight a.m. and left around nine p.m. An Australian HR employee, one of a handful of international employees at the hotel, remarked that it was ridiculous for the upper level staff to be at work such long hours. From her desk in the main office, she noticed that the time wasn’t being spent efficiently and their productivity would be increased if they worked more in fewer hours. When I moved out of my hotel employee dorm, I had to do my own souji, or cleaning, check. The landlord directed me to scrub the balcony with a scourer, wipe the door and clean the sliding doors. After checking my work the first time, he instructed me to re-scrub the balcony and wipe the door’s inner ledges. This was another lesson in the collectivist culture – the landlord told me that I should clean more thoroughly so that “the next tenant can move into a good-feeling room.”

This summer opportunity was a fantastic experience for me and I thank the ILR International Program for its support. Academically, I was able to be a part of a Japanese workplace and its dynamics; I saw my textbooks and class work in action. Culturally, I immersed myself in the local language, met locals and became somewhat of a local in daily and work life. Personally, I believe I became a tougher, more articulate and more independent person from having to prove myself as an adult in Japan. I feel prepared to explore ILR more intensely.