From Ithaca to Vrindivan: Reflections on my ILR International Experience 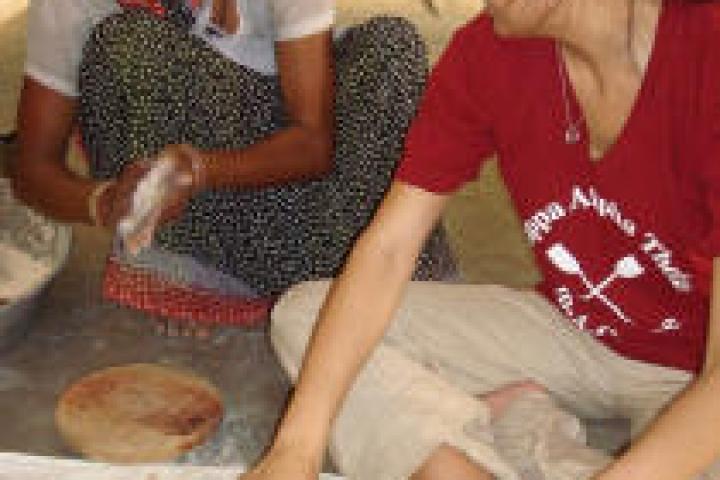 From the beginning of elementary school to my final year at college, I have written hundreds of papers throughout my life as a student. While majority are forgotten once they are turned in, there are some which make an impact beyond the deadline, and the rare few which take you around the world.

I approached my final paper in my Labor Relations in Asia class like any other. In the process of researching the role of self-help groups in India, however, I developed a conviction beyond simply wanting to complete it. I became extremely interested in women’s empowerment, a subject that has received surprisingly little attention. The more I discovered how widely unknown and contentious women's empowerment in the developing world was, the more I was inspired to pursue my own research and make a contribution. The opportunity presented itself when I learned about the Akshaya Patra Foundation, the world’s largest NGO-run midday meal program. Akshaya Patra's decentralized kitchen model was an ideal case study for women's empowerment in rural India as it employs hundreds of village women to cook mid-day meals for the children in the local schools. After receiving a generous grant from Cornell University's School of Industrial and Labor Relations, I set off for India in May 2010.

My project location was in Vrindavan, approximately three hours from Delhi in North India. A typical day involved heading out very early in order to avoid the excruciating summer heat and visiting three rural schools that were served by decentralized kitchens. The trek to each school was a rocky ride on narrow and unpaved streets to remote villages without any plumbing, electricity or any type of proper infrastructure. In a country that is undergoing one of the most rapid processes of globalization that the world has seen, there are people who have been left out and forgotten.

At each school, I cooked chappathis over firewood with the women, distributed the food to the children, and conducted interviews when the work was finished. I asked about their families and their dreams, their pasts and their futures, their struggles and their shortcomings. I learned that all of them were uneducated and most had no awareness of life outside the village. Many were widows and their monthly salary, equivalent to twenty U.S. dollars, went towards funding their children’s education, marriages, and medicines. Prior to working for Akshaya Patra, the majority of women worked long and strenuous hours in the fields where their earnings were neither secure nor substantial. Working for Akshaya Patra, however, they not only worked shorter hours for higher wages, they also gained respect in the village, developed skills relating to cooking and hygiene (which benefit the entire community), and established new relationships with each other, the school and the Akshaya Patra staff.

Although I arrived in India with the intention of studying women’s empowerment, I departed India realizing my research was equally about the women’s survival. For the majority of these women, jobs did not necessarily bring about a revolution, rather they provided a livelihood: a steady income for their families, an identity in the village, and a social cause worth working for. Akshaya Patra's mission of alleviating hunger in India is multi-dimensional. It aims to alleviate poverty through its employment of local women, representing a fundamental step in the developing world. However, there is much that needs to be done in order to formally institutionalize this initiative and make it sustainable. Compliance with labor legislation continues to be a challenge. In addition to job-related skills such as hygiene and food maintenance, the women must also learn personal financial management skills to help lift them out of poverty. For example, most of the women lack access to banking services and do not save any of their earnings. Akshaya Patra is taking initiatives to tackle these issues and is already making significant progress.

In today's modern era, notions of interconnectedness and advancement dominate the global political and economic discourse. As a result, our perceptions are often distorted by these ideas and we are left unaccountable for the millions of people who live in extreme poverty. My experience with Akshaya Patra was an eye-opening and gratifying insight into seeing how the “other” side of the world lives; a side of the world we often lose sight of beyond the dusty college textbooks and flashy news specials. It revealed to me a striking dichotomy between the simplicity of village life, devoid of Western power and politics, and rural India’s urgent need for development.

There is a harsh inequality between the developed and the developing world which threatens to burden our future generations. Even so, I believe the outlook is positive. Projects like Akshaya Patra's decentralized kitchen model demonstrate that through inclusive innovation, we can effectively reshape our approach to solving the world's most pressing problems. Akshaya Patra's success teaches us that we must not only leverage our own knowledge and resources to close this widening gap, but most importantly, reach out to those who are the most vulnerable to participate in order to see a more hopeful and empowered tomorrow.