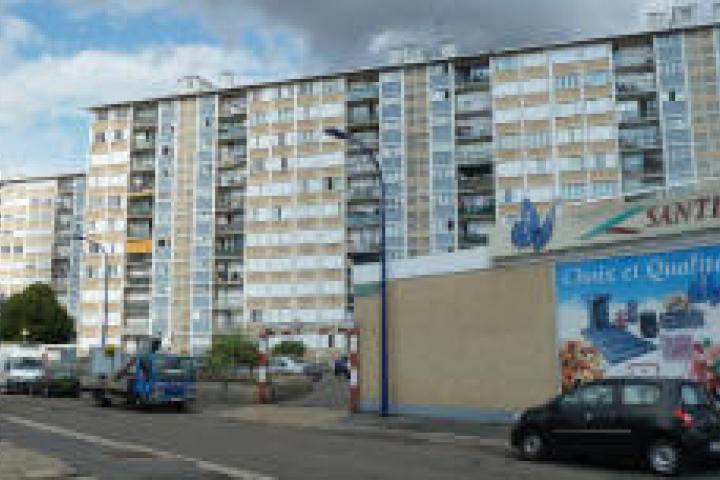 I spent eight weeks in Paris, France, expanding my prior independent studies of immigration and public housing into fieldwork. I studied multicultural and social service organizations in both the city and immigrant-concentrated banlieues, or Parisian suburbs that work with uprooted and undocumented immigrants and promote diversity and interfaith dialogue. Living in Paris, I constantly analyzed and compared the spatial design, community resources, and public services of the city and banlieues, documenting my observations through reports and photographs along the way. (Pictured right - A typical “habitation à loyer modéré,” or rent-controlled housing project.) The experience enriched my understanding of the politics surrounding immigration, integration, and social welfare in France.

While I had read countless academic articles, eyewitness and investigative accounts on the topic, I hadn’t directly communicated with the subjects of my research until I arrived in France. Over the course of the summer, I interviewed North African immigrants, French-born youth of North African ancestry, and progressive French activists and academics. I conducted the interviews in French, and often, on-site, which brought so much life to my research and really exposed me to stories and voices behind the statistics. (Picured left - classical nineteenth-century architecture that pervades the city.) While in France, I also witnessed a series of strikes and protests over brewing economic and social reforms, from new pension legislation to a public ban on the burqa. In each case, demonstrators marched in defense of entrenched ideals, of supposed rights and responsibilities that accompany citizenship under the “French Republic.” Gaining such an eyewitness account both solidified and broadened my research interests. In the context of mounting labor, cultural and ethnic unrest, I now plan to explore whether the right to decent affordable housing actually extends to the relatively recent North African immigrants and their descendants, who maintain citizenship, yet experience chronic unemployment and exclusion from political participation. I appreciated the chance to learn serendipitously, to deviate from my pre-designed path and am excited where my research will now take me as I continue to synthesize my work from the summer.

Traveling independently is challenging, though rewarding in many ways. During my first week abroad, I had to adapt to a new culture and actually apply the skills – both language and research - that I had previously utilized only in the comfort of the classroom, underneath mentors and professors. In Paris, I learned to take initiative, to arrange interviews and knock on office doors, and to reflect, write, and synthesize every step of the way. The community directors and researchers I met and worked with were, for the most part, friendly and accommodating and have become my professional contacts. (Pictured right - Non Profit Organization - Association des Travailleurs Maghrébins de France.)