“You Can Succeed at Anything” 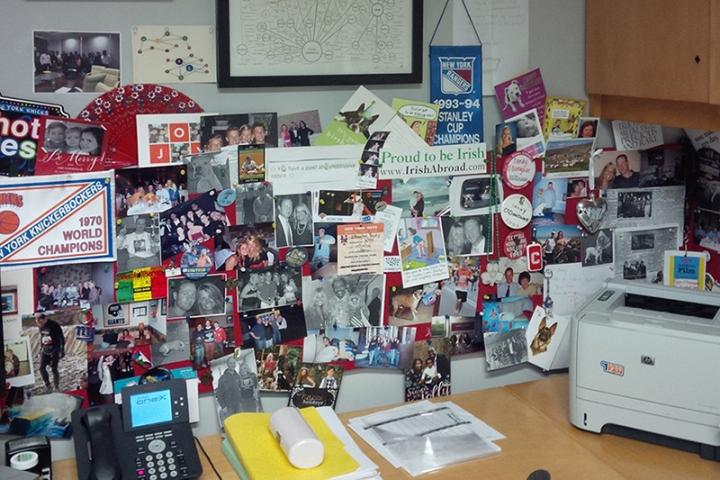 Ask Tandy O’Donoghue ’94 about her career, and the word “fortunate” comes up again and again.

Executive vice president of corporate strategy and analytics for World Wrestling Entertainment, O’Donoghue was fortunate to have had a father who spent his career in industrial and labor relations.

“Growing up, I learned a lot about unions and collective bargaining,” says the life-long sports fan.

“The 1982 and 1987 NFL strikes were significant milestones in my childhood because they made me realize that I wanted a career in labor relations in sports, and that the ILR School was the one and only place to put me on that path.”

After earning a bachelor’s degree at ILR and a law degree at Tulane — a school she chose for its renowned sports law program — O’Donoghue was fortunate to join the law firm she set her sights on, Proskauer Rose LLP.

As a junior associate, O’Donoghue worked alongside a talented team of colleagues representing major sports leagues and properties.

She left Proskauer for a “once-in-a-lifetime opportunity” at the Women’s Tennis Association Tour, where she found “something I was even more passionate about” — the business side of the sports industry.

At Proskauer, at the tennis tour and later at the U.S. Tennis Association, she was fortunate to meet and work with legendary women, including Billie Jean King, the one person, she says, “who left me in awe.”

“I am eternally grateful for the risks that she and others took to pursue equality,” O’Donoghue says.

Of her data analytics role, she says, laughing, “My statistics professors from Cornell would shake their heads and wonder what WWE was thinking when it gave me that responsibility! But, I’m glad WWE took the risk and gave me the opportunity — it’s an incredibly exciting field and I’ve had the privilege of building a world-class team of data scientists and strategists who bring numbers and insights to life.”

She attributes WWE’s global success to its “amazing world-class athletes” and its compelling storytelling, “good vs. evil translates everywhere,” and its unique way of engaging fans and making them part of the story.

“Our job is to make the product as exciting as possible and to give our Superstars the platform to bring smiles to people’s faces,” she says.

At WWE, “our Chairman and CEO Vince McMahon has a saying that really captures our DNA and empowers us as a team — ‘first day on the job.’ Treat every day as if it’s your first day at WWE; look at the business with a fresh perspective; challenge the status quo; there are no rules.”

As for her own success?

O’Donoghue says she’s been fortunate to work for organizations and managers that were gender-blind and “gave me every opportunity.”

Now, she makes it a part of her mission to recruit and promote “great” women. “I want women to know what my parents instilled in me: You can succeed at anything.”