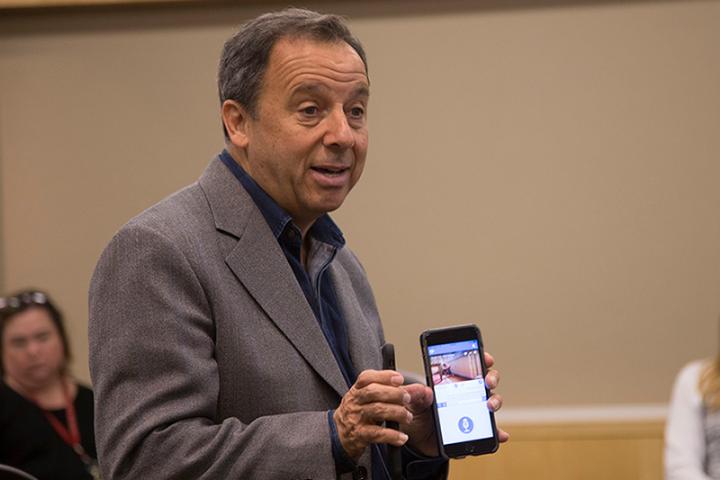 In public, he was senior national affairs writer for The Wall Street Journal, where he won the 1995 Pulitzer Prize for Feature Writing for articles that became the starting point for his first book, “A Hope in the Unseen.”

In private, Suskind was learning from a son, Owen, who stopped talking when he was a toddler.

Suskind shared his son’s autism journey, featured in the 2016 movie, “Life, Animated,” adapted from a book of the same name by Suskind, at a Sept. 28 talk at the Yang-Tan Institute on Employment and Disability.

Suskind’s visit to ILR came weeks before YTI partners with CornellTech, Computer and Information Sciences and the Office of the Vice Provost for Research to sponsor Technology Changes Everything, an Oct. 26-27 forum in New York City at Baruch College on the role of technology in broadening workforce inclusion for people of all abilities.

Owen, Suskind said during his talk at ILR, “was chatting away at two, and at three, lost all speech.”

This was 1994, when autism was less understood than it is today.

“In 20 years, there has been a huge difference,” Suskind said. “This was before the incidence rates and diagnosis rates began to rise publicly.”

The thing Owen enjoyed the most before and after the autism diagnosis was animated Disney movies.

“We realized that Disney movies were attracting his attention and maybe there is something there,” Suskind said. “Over several years, he memorized 50 Disney animated movies.”

The Suskind family noticed that Owen could be given a line from a movie and recite the following dialogue for an hour.

“The breakthrough moment was when I talked as the evil sidekick of Jafar, Lago, from the movie ‘Aladdin,’” Suskind said.

As Lago, accompanied by a puppet, Suskind asked his son how it felt for him “to be you.”

“He turned toward the puppet like he was turning toward an old friend and said that he was lonely and has no friends,” Suskind said.

As the conversation continued between “Lago” and Owen; Suskind learned that Owen thought of Lago as a friend for making him laugh in the movie.

“The lights came on,” Suskind said. “Each of us would play characters that fit our personalities, and then over several years, he gets speech back and learns to read from the credits.”

The strength-based model, called affinity therapy, finds that for every deficit, the brain creates a strength that needs to be fed, according to Suskind.

Media and movies were the doors that opened Owen to his family, and technology is now helping bridge the family an Owen.

Over the past two years, Suskind, the inventor of Siri, Owen and members of the tech community created an app called “Sidekicks.”

“When I call Owen, we are paired on our phones and we can share any video in real-time anywhere in the world” Suskind said. “We have avatars when I talk or type in my phone it talks in the voice of the character in his phone.”

Conversations are possible through these entities and are personalized through the avatars.

“Eventually, the goal is to get to mass personalization where big data and automation is personalized to you,” Suskind said. “The analytics have to be machined for you to live a better life.”