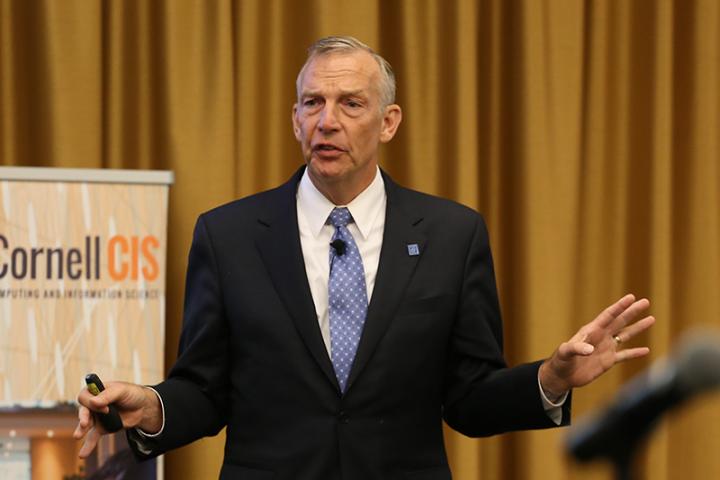 The landscape for increasing technology sector jobs for people with disabilities is rich with possibility, packed with potential and already showing business benefits.

Those were the encouraging words from Pat Romzek’s keynote at the Oct. 26-27 forum “Technology Changes Everything: Innovating to Include People of All Abilities in a More Diverse Workforce."

Led by the K. Lisa Yang and Hock E. Tan Institute on Employment and Disability, it was held at Baruch College in New York City and drew nearly 200 participants.

Speakers from technology companies, nonprofits, the disability community, government, academia and startups discussed promoting tech sector employment and training and entrepreneurship among people with disabilities, along with related recruitment and hiring issues.

Romzek began his talk with the startling statistics many in the disability community know well. Two-thirds of people with disabilities who are of working age are jobless. Those who do have jobs are usually underemployed, underpaid and live in poverty.

Those outside the disability community, though, “don’t often realize how awful the problem is," he said. “More attention is paid to homeless dogs.”

Incrementally, opportunities for people with disabilities are improving in some corners of the tech sector, said Romzek, an executive who works with the LifeChanger project at Cisco. He is also the father of a son with a disability.

Executive-level leadership and commitment, starting small and leveraging the business case for employing people with disabilities, who are almost always high-productivity workers, are some of the factors driving success, Romzek said..

Success by workers with disabilities is driven by character traits such as integrity and empathy, so don’t be influenced by lack of education or work history, since most applicants with disabilities have not had those opportunities, he said.

Look at the promise, instead, Romzek said. Disability inclusion is a proven brand builder and has high investment potential, too.

“You can change the world,” he concluded. “It’s complex, but there is a way forward.”

The forum, said Susanne Bruyère, director of the Yang-Tan Institute, is an example of radical collaboration across Cornell entities.

Cornell co-sponsors are Cornell Tech, Computer and Information Sciences, Entrepreneurship at Cornell and the Office of the Vice Provost for Research.

The event was focused on improving employment outcomes for people with disabilities in the tech sector, as well as promoting inclusive design enabling people of all abilities to access web-based products and services, and tech-intensive workplaces.

To see the agenda, go to http://www.yti.cornell.edu/technology.

Bruyère, a Cornell University ILR School professor of Disability Studies and director of the Yang-Tan Institute provided context for the topics covered by the forum in a statement issued in October, which is National Disability Employment Awareness Month.

“We need to be thinking about radical new approaches to facilitating needed changes to take advantage of this largely untapped labor force. Technology and the tech industry is offering us these opportunities across a number of fronts,” she said.

“Tech employers are accelerating positive outcomes for workers with disabilities and helping close employment and economic gaps; tech’s growth and partnership with the disability community is beginning to move job barriers for thousands each year.”

“Embracing neurodiversity is an exciting paradigm shift. Employers may have historically hired people with disabilities for altruistic reasons, believing it was ‘the right thing to do.’ But today, with an increasing appreciation of the value that diversity brings to business, employers are reexamining their views and seeing how this additional dimension to diversity can be great for business.”

“Today’s increased focus on neurodiversity indicates even further progress on the part of employers — it’s all about skills and innate abilities. Numerous businesses are recruiting people with unique neurological characteristics, including those on the autism spectrum, who can offer exceptional talent.”

“We hope that this newfound interest will expand to a greater appreciation of the unique abilities each of us, including people with disabilities, bring to the workplace and to business success,” she said.

Bruyère has served as project director and co-principal investigator of many federally sponsored research, dissemination and technical assistance efforts focused on employment and disability policy and effective workplace practices for people with disabilities.