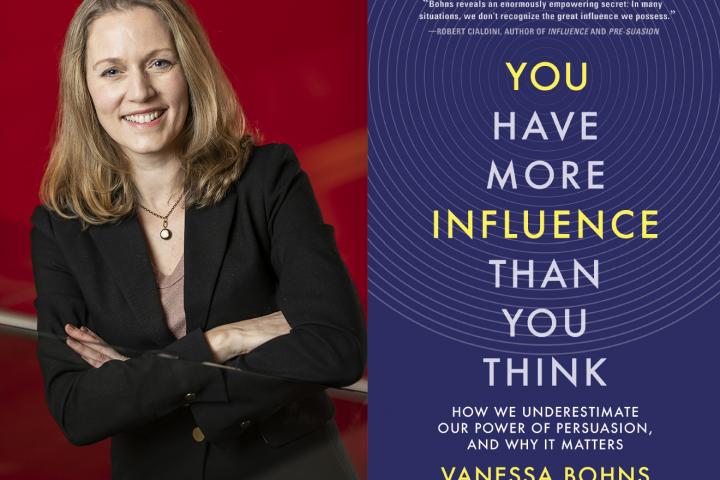 In the introduction of her book, “You Have More Influence Than You Think,” Cornell ILR Associate Professor Vanessa Bohns warns, “This is not going to be your typical book on influence and persuasion.”

Instead of teaching the reader how to gain the influence they don’t have, Bohns draws on her 15 years of experience and research to illustrate that individuals already have tremendous influence over others – they just don’t realize it.

“There seem to be endless books, articles, and seminars on how to gain influence, and if you were to take their popularity at face value you would think that people are hopelessly lacking in influence and desperately need all sorts of tricks and tips to gain it,” Bohns said. “But as a social psychologist who has studied social influence for many years, I see all the time how much influence we have over other people. So, this book is a counterpoint to the message that you need some special something in order to have influence. It says, you actually already have influence everyday—you may just be overlooking it because of several psychological biases that cause us to regularly miss seeing the influence we have.”

Bohns, a social psychologist and professor of organizational behavior, draws from her original research, and that of others in her field, to illustrate why individuals fail to recognize the influence they have, and how that lack of awareness can lead to missed opportunities or accidental misuse of our power.

In the early chapters of the book, Bohns cites studies conducted by Erica Boothby (University of Pennsylvania), Tory Higgins (Columbia), Sebastian Deri (Cornell) and Ellen Langer (Harvard), among others, to illustrate how individuals underestimate how much they are observed by others, while at the same time overestimating how much others notice things the individual finds embarrassing. Bohns also draws on what Boothby calls the “liking gap” to explain that “people like you more than you realize, which in turn means you have more influence than you realize.”

Building on these studies with her own research with Frank Flynn (Stanford), the heart of Bohns’ book demonstrates that people see one another, listen to one another and agree to do things for each other more than we realize— for better, and for worse. Throughout the book, Bohns offers science-based strategies for observing the effect individuals have on one another, and even demonstrates how “our influence over others has a dark side,” writing that “to combat misinformation, sexual harassment, racial discrimination, organizational misconduct, and so much more, we each must recognize our own role in perpetuating or condoning these things, and take responsibility for the influence we have.”

“There are two main things I want a reader to take away from this book,” she said. “First, I want them to feel reassured. This book is in many ways a summary of the research I’ve used to make myself feel better in those awkward moments where I’m walking away from an interaction cringing about something I said, or working up the courage to ask for something. I remind myself that the research says we are harder on ourselves than we need to be, and that people are less likely to judge us for our foibles, or for needing help, than we think they are.

“Second, I want them to be more mindful of the impact they have on other people every day—to do a sort of ‘influence audit’—in order to ensure that their impact is a positive one.”

Published by W.W. Norton & Company, “You Have More Influence Than You Think” is available Sept. 7.