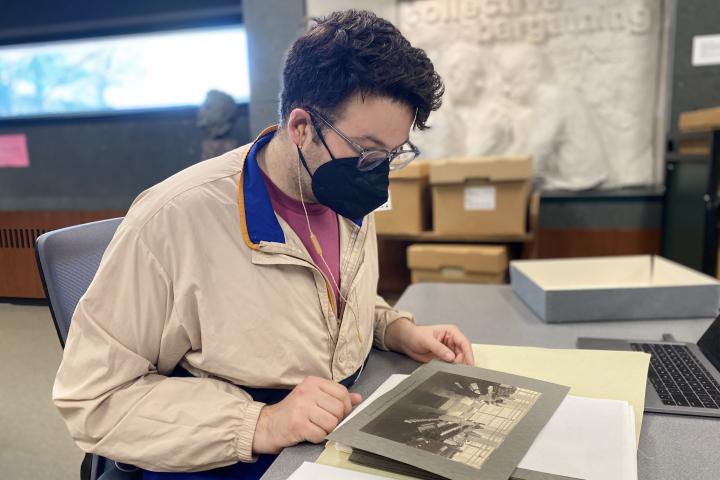 The Kheel Center has announced that Mary Vidaver and Ian Gavigan have been selected as this year’s Richard Strassberg Travel Grant award winners.

The grant was named in honor of former Kheel Center Director Richard Strassberg (1977-2007) in recognition of 30 years of exceptional leadership and dedication to Cornell University. Established on the occasion of his retirement with funding provided by Ann S. and Theodore W. Kheel, the grant provides financial support of $1,500 yearly to select researchers, scholars and graduate students who seek to conduct research at the Kheel Center for Labor-Management Documentation & Archives of Catherwood Library. Catherwood, located in the ILR School, is part of Cornell University Library. Preference is given to projects that have a high probability of publication or public dissemination.

Vidaver, a doctoral candidate in history at the University of Mississippi, seeks to study collections applicable to social feminism, union organizing and religious activism in the U.S. South during the latter years of the 19th century and the first half of the 20th century. Vidaver hopes to focus specifically on the Kheel Center’s materials offering insights into the life, activities and allies of Lucy Randolph Mason (1882-1959), a woman who exemplifies a multi-generational set of white, middle-class activists inspired by a potent blending of religious and political ideas in a Southern Social Gospel.

“From oral histories to historic documents to the compilations of research by earlier scholars, the extraordinary collection of materials Kheel Center will prove invaluable,” Vidaver said. “I am thrilled by the selection committee's vote of confidence in this specific proposal and in my larger project that links religious thought and ideas of democracy to a wide range of social justice activism in the South."

Gavigan, a doctoral candidate in U.S. history at Rutgers University, will use the Kheel Center to further his dissertation “Left Behind: The Socialist Party from the Gilded Age to the New Deal Order, 1890-1950.” Stretching from late 19th century industrial struggles to mid-20th century decline, Gavigan’s dissertation reconstructs U.S. socialist history from the vantage of its grassroots. He plans to utilize records from leaders of the Socialist Party and labor movements in Pennsylvania, as well as organizational documents and ephemera from the Hosiery Workers, American Association for Labor Legislation, Amalgamated Clothing Workers of America Records.