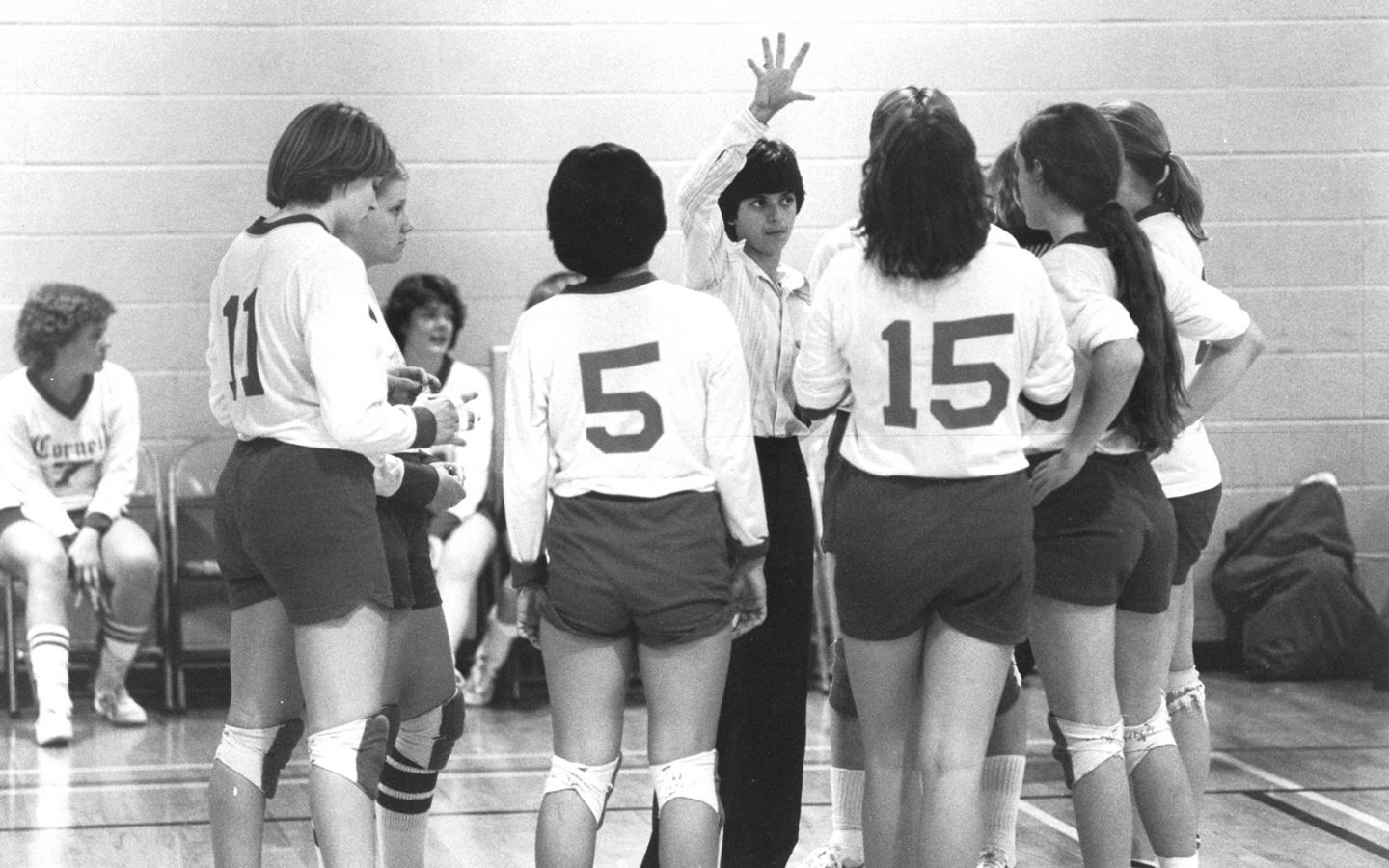 Andrea Dutcher, MILR ’87, came to Cornell in 1974 to teach physical education. A standout golfer and basketball player at Penn State, she had been on the job just a few days when she was told she would be given the head coaching positions for the Big Red volleyball and skiing teams to supplement her income.

“I knew nothing about volleyball,” Dutcher said. “But, all the women in the department held several positions, and sometimes it was a position they weren’t really qualified to hold. That’s the way women’s athletics was at the time.”

At most women’s sporting events today, the venues are set up by the department’s facility crew. Student-athletes are taped and treated by an athletic trainer devoted solely to their team. Game programs are provided by the Department of Athletic Communications, and refreshment stands are run by Cornell Catering.

In the late 1970s, the scene was much different.

“As the coach, I set up the gym for games and tore down the gym afterward,” she recalled. “I cleaned the floors, I taped the kids, I wrote the stories for the newspaper. We made our own programs and we ran the refreshment stand to make money for the program.”

“The men’s and women’s athletic departments were separate at the time, and what I was doing was what all women’s coaches were doing, so we thought it was normal. And honestly, we had a blast and we were just happy to have the opportunity to play!”

Her lack of volleyball knowledge, and her seemingly endless list of job responsibilities, didn’t stop Dutcher from becoming the all-time winningest volleyball coach in Cornell history with a record of 346-158-7 over 14 seasons. In 1999, the Ivy League dedicated its volleyball championship trophy in her honor.

On top of her full-time job in the department and her two coaching positions, Dutcher completed a master’s degree in education from Cortland and began taking a few classes at Cornell, eventually finding her way to the ILR School via an introduction to human resources class.

“It was a great class,” Dutcher said. “I just loved it. And, at that point I had nine credits at the university and I thought maybe I'll just see if I can get a Cornell degree – and I really liked the ILR class a lot. So, I looked into it more.”

She applied for ILR’s master’s of science program, which required an in-person interview to gain admission and she met with Professor Larry Williams, the director of the graduate program at the time, and Professor George Milkovich, who later became her adviser.

“There was another professor whose name escapes me, but in the interview he said, ‘We've never had anybody from the Athletics Department in the ILR School. What could you offer the ILR School?’ And you know, I just said, ‘Maybe I could get you some hockey tickets?’”

“I thought Larry was going to fall off his chair laughing, but the professor that asked the question just stared at me. So, then I explained that it makes perfect sense for someone in the athletics department to be in the ILR School. I said, ‘I'm the CEO of Cornell Volleyball. I have to hire and train 15 players, every year. I have to do performance evaluations with them, thousands of times every day in practice, and in games. I have support personnel, I have budget management. I have disciplinary action with some of my players. I have macro organizational behavior things. I have micro organizational behavior things. I can't think of one other thing that would make it more appropriate for someone like me to be in the ILR School.’”

“I loved my time at ILR so much. It was a very rewarding experience,” Dutcher said. “Not just professionally, but personally, as well. You know, because I started off in the MS program, I got assigned to a carrel in Catherwood Library. So, it would be funny because my volleyball players knew that I had carrel Number Six and if they were having a rough time finding someplace to sit and be by themselves they would walk up to somebody sitting in my carrel and say ‘Excuse me, but this carrel is not assigned to you.’ And then I would go into the library after practice or on the weekends and there would be one of my volleyball players sitting there. That, or they would leave me little sticky notes. It just added to a great experience.”

When she retired from coaching, Dutcher moved into an administrative role with the Big Red Department of Athletics, serving as director of Helen Newman Hall and Intramural Sports. She was named the first Helen A. Newman Director of Recreational Services in 1997 and eventually became the Robert E. Browning, Director of Physical Education, when she assumed the reins of the entire non-intercollegiate program in 2009 as an associate athletic director. In that role, Dutcher oversaw one of the largest and most diverse physical education programs in the Ivy League with over 100 courses and more than 40 club sports.

Dutcher was promoted to senior associate director of athletics for physical education in 2012 before retiring in 2016. During her time with the department, she was instrumental in developing, implementing and growing Cornell Recreational Services into a model that schools nationwide strive to emulate. Her leadership and stewardship helped Cornell renovate Helen Newman Hall and build the Noyes Community Recreation Center while establishing Cornell intramurals as one of the premier programs in the nation. In 2011, she received the National Intramural-Recreational Sports Association Regional Award of Merit for demonstrating exceptional performance in the field of collegiate recreation.

For her contributions to the Big Red Department of Athletics, Dutcher was inducted into the Cornell Athletics Hall of Fame in 2018, and she considers her MILR degree to be a big part of her success.

“Having that MILR degree under my belt certainly helped me connect better with Cornell alumni, which I had to do throughout the rest of my career, and certainly I learned a lot,” she said. “I feel like I was in human resource management the entire time I was coaching, and especially after I stopped coaching. I went into intramurals and there was just two of us as full-time staff and 30 students supervisors. When I retired as the senior associate director, I had 50 full-time people and 400 students and roughly 250 part-time people working for me.

“Every step that I took at Cornell University led me to more and more human resource management, and certainly the theoretical background that I learned in the ILR School helped me put all of that into practice throughout my career.”